With the help of Easy Software Deployment you can easily distribute existing scripts and have them executed. You can even choose whether you just want to run a script without installing a new application, or have a script run by a previously installed application. Read along.

Situation 1: You only want to run a script, and not install an application. Here’s how:

Right click on Installation Items. You can immediately create a new item here, including a script, but you can also choose to create a new category first, so that you can put all the scripts together in one folder. 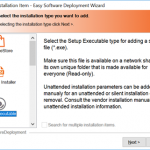 You will see this screen: 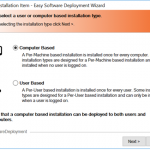 Computer Based is the most common and also the most logical choice for almost every situation. The application and the associated script will be installed on any computer you select later, so it does not matter who logs on to that computer.

User Based means that the application will only be installed for the users you select. In that case, it does not matter where this computer logs in.

Click Next and then choose a script file, with the extension .vbs or .cmd. If you have a PowerShell script, you must first choose to see All Files.

Then link the script to an AD group, one or more users and/or computers. This is the same step you do for other applications, and we will not explain it here.

Situation 2: Deploying a script for a previously installed application

Scripts can of course also be started before or after an application is installed. We can explain this using an example with WinRar. 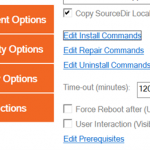 Click Add in the next screen to add the script. 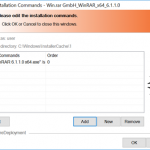 Tip: In this case it is a good idea to put the script in the application folder to keep everything together. You can of course also put it in the general Scripts folder.

You can change the order using the arrows to make sure the script starts at the time you want. At the top means that the script is executed first and only then will the application be installed. The reverse is also possible; in that case, put the script at the bottom.

The deployment is based on the groups of users and/or computers previously set up for the application.

Easy Software Deployment is a professional software distribution solution for the price of a cup of tea per month.

We are Provolve IT. Makers of Easy Software Deployment.